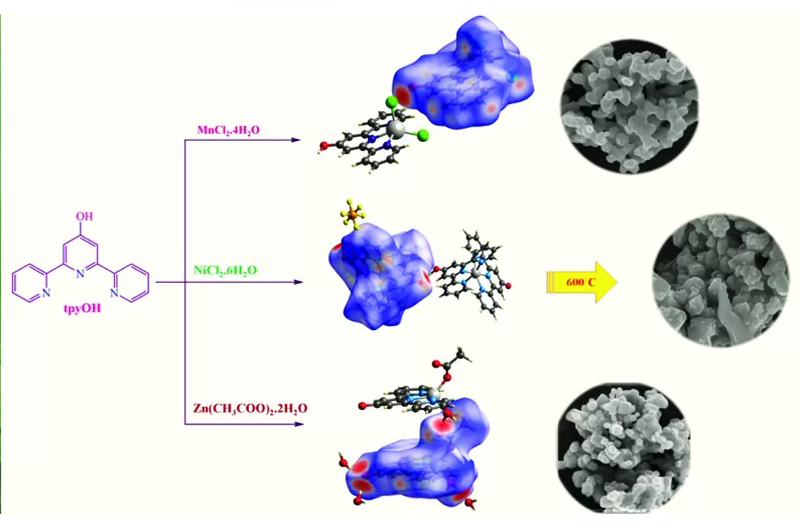 A series of new mono- and bis-terpyridine complexes [Mn(tpyOH)Cl2]( 1), [Ni(tpyOH)2](PF6)2 (2) and [Zn(tpyO)(η1-OCOCH3)(H2O)].3H2O (4) containing 4′-hydroxy-2,2′:6′,20″-terpyridine (tpyOH) were synthesized and structurally characterized using elemental analysis, infrared spectroscopy and single-crystal X-ray diffraction. The reaction of MnCl2 with tpyOH in a mixture of methanol and CH2Cl2 resulted in the formation of 1. The X-ray crystal structure of 1 reveals that Mn(II) is penta-coordinated by three nitrogen atoms from tpyOH and two Cl− in a slightly distorted trigonal bipyramidal geometry. Complex 2 was also prepared by the reaction of nickel(II) chloride with tpyOH in a methanolic medium in the presence of NH4PF6. Notably, the complex [Ni(tpyOH)(tpyO)]PF6 (3), obtained during the crystallization of 2 from dichloromethane, was characterized using X-ray crystallography which shows that six nitrogen atoms from terpyridine ligands occupy the coordination sites around the Ni(II) centre in a distorted octahedral geometry with four longer bonds and two shorter Ni N bonds. The reaction of zinc(II) acetate with tpyOH in a mixture of methanol and CH2Cl2 led to the formation of 4. The crystal structure of 4 reveals the formation of penta-coordinated Zn(II) complex containing three nitrogen atoms from tpyO, a monodentate acetate ligand and one coordinated water molecule. Hirshfeld surface analyses and two-dimensional fingerprint plots show that the main interactions are O… H/H…O contacts in 1, 3 and 4. The thermal decomposition reactions of 1, 2 and 4 were studied using thermogravimetric analysis in detail due to their different structures. The solution luminescence features of 1, 2 and 4 include high-energy intense π-π* intraligand and low-energy metal-to-ligand charge transfer transitions at room temperature. The calcination of the coordination complexes led to the formation of corresponding nano metal oxides. The products were structurally characterized using infrared spectroscopy, scanning electron microscopy and energy-dispersive X-ray spectroscopy. The average particle size using Scherrer’s equation was calculated to be below 50 nm.